FX/SFX: It depends on the variant. For The Bugs Bunny Show and The Porky Pig Show, it's the characters opening the shield. None for The Road Runner Show.

Music/Sounds: The closing theme of the show. On The Road Runner Show, we hear the Road Runner's distinctive "Meep meep!" and tongue-popping-out sound effect.

Availability: Rare. It's seen on TV broadcasts of The Porky Pig Show and The Road Runner Show.

Logo: Another generic variant of the TV logo of the era, this time for the 1967 WB-SA TV logo.

Availability: Rare. It's usually seen on The Bugs Bunny/Road Runner Show. Later used for some episodes of The Bugs Bunny Show before 1970.

Logo: Same as before, except the LT characters stand beside the 1972 WBTV logo (the Big "W" logo) with the company name on top (in the Warner Communications custom typeface) and the byline "A WARNER COMMUNICATIONS COMPANY" below.

Variant: On the 1979 Bugs Bunny Valentine Special and the 1981 special Bugs Bunny: All-American Hero, the font in the logo is seen in a black color.

Availability: Quite rare, it's seen on episodes of The Bugs Bunny/Road Runner Show and The Sylvester and Tweety, Daffy, and Speedy Show, as well as other Looney Tunes specials during the era, though most specials plaster it with the 6th logo.

Logo: Same as before, except the LT characters stand beside the WBTV logo logo with the company name on top and the Warner Communications byline below. The WBTV logo uses the WB shield logo, without the banner. This is all on a red background.

Variant: In the early days, the name and the byline were in the previous logo's font. In 1984, the font was updated to reflect the new WBTV logo introduced at the time.

Availability: Extinct. Once again, it was available on The Bugs Bunny Comedy Hour and on the last few seasons of The Bugs Bunny/Road Runner Show during the era.

Logo: Same as before, but with Bugs Bunny (on the left) and Tweety (on the right) on a purple background with the WB logo with a maroon background inside.

Variant: By no later than 1990, the top byline was changed to "WARNER BROS. ANIMATION INC.", which takes over the screen.

Availability: Extinct, it was only seen on The Bugs Bunny & Tweety Show. But it was common in Canada, due to the show frequently airing on Teletoon Retro before it shut down.

Logo: Over a royal blue wallpaper of little WB print shields, we see Bugs Bunny in the spotlight, prompted on top of the company name "WARNER BROS. ANIMATION INC." in yellow-green.

Music/Sounds: The sound of Bugs munching his carrot, usually played over the closing theme of the show.

Editor's Note: This logo is inspired by the Bugs Bunny opening titles for Looney Tunes cartoons from the late '40s-early '60s.

Logo: On a cloud background, we see the standard WB shield in a small, different looking design. The banner reads "WARNER BROS. ANIMATION".

Variant: On Happy Birthday, Bugs: 50 Looney Years, Bugs Bunny's Creature Features, and Bugs Bunny's Lunar Tunes, the WB shield banner doesn't read the Warner Bros. Animation name, but "WARNER BROS. PICTURES" (exactly what you'd see on a first run Warner Bros. Television program (without the Animation name, of course) from 1990-1992 or on Tiny Toon Adventures). On top of that, "WARNER BROS. ANIMATION INC." is written on top and the Time Warner byline is on the bottom.

Music/Sounds: The opening theme of the show. On Taz-Mania, it has the last 4 notes of the Taz-Mania ending theme. On Tiny Toon Adventures: How I Spent My Vacation, it's the finishing of the end-title theme.

Editor's Note: This logo would set the precedent for the WB Animation logos for the next 25 years.

Logo: Over a set of clouds, we see a very metallic rendition of the WB shield, with the banner reading "TELEVISION ANIMATION", and the byline at the bottom. Underneath is the byline, "A TIME WARNER ENTERTAINMENT COMPANY".

Music/Sounds: Silent or the ending of the show's theme.

Editor's Note: The template used for this logo is still being used by Warner Bros. to this day; in fact, it's being used for their corporate divisions.

Logo: Same as the Warner Bros. Television logo of the time, but the banner reads "TELEVISION ANIMATION". Underneath is the byline, "An AOL Time Warner Company" and the "www.warnerbros.com" URL.

Trivia: On one episode of Duck Dodgers, the end credits cut to black in the place where the logo should be. The reason for this is unknown, though it may be due to bad editing. The almost exact subject happened on What's New, Scooby-Doo?, but the last credit is somehow frozen and the logo doesn't appear at all.

Music/Sounds: It's usually the outro of the show's theme music, but is also seen silent on some direct-to-video movies (typically if it follows a DC Comics logo, a Hanna-Barbera credit, or a dedication in the credits).

Editor's Note: A somewhat odd logo. WB is still using this design template for their movie division. It was ultimately decided to give the WB animation division its own identity, somewhat akin to the Termite Terrace days.

Logo: On a red spotlight background, we see the standard WB shield much like before, with Bugs Bunny (drawn in his 1940s style) on the left, munching his carrot. The shield is more computer-generated. Below the shield is "Presents" in white script.

FX/SFX: Just Bugs munching his carrot. Also, the shield zooms up a bit on both the original and alternate logo. None for the closing variant.

Trivia: The CG shield animation for The Looney Tunes Show variant was made by Wut It Is. Also, the alternative logo was made by Mark Marek.

Music/Sounds: The opening variant plays a sped-up version of the very end of the 1945-1955 rendition of "Merrily We Roll Along" with Bugs munching his carrot, while the end variant uses the end theme of the show.

Music/Sounds Variants: The ghouly version plays an organ sped-up version of the very end of "Merrily We Roll Along". The alternative logo has no music.

Editor's Note: The red velvet background and the cursive "presents" gives the logo a retro feel. The Looney Tunes Show variants gives a nod to The Bugs Bunny Show intro. 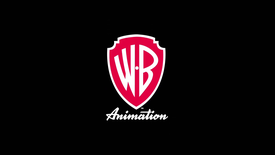 Logo: On a black background, the WB Shield used from the intro of the 2010 Looney Tunes shorts is displayed. Below the logo is a byline script that reads "Animation". Its lacking design and short life make could mean its just a placeholder logo for the next logo below.

Variant: In The Flintstones and WWE: Stone Age Smackdown, rocks break as it's chiseled for the logo to appear on a splotchy gray background.

Trivia: Despite the official logo not debuting until 2014, the print logo appeared in-credit on shows as early as November 11, 2011.

Editor's Note: It's a very simple and cheap looking logo, although it may have been a placeholder.

Logo: The WB Shield fades in with a dim shine over the shield and zooms in as the black background turns into a dark blood red background of Looney Tunes bullseye rings. After the WB shield is there, the script "Animation" is written in cursive writing.

Trailer Variant: On the trailer for Scooby-Doo! & Batman: The Brave and the Bold, a still version of the logo gradually zooms in along with the DC logo.

FX/SFX: The shield fading and zooming, the background fading in, and the script being written.

Music/Sounds: The closing theme of the show or the whoosh sound effects. The variant has the music from the opening of Vixen and Freedom Fighters: The Ray playing.

Editor's Note: This logo is definitive in their Looney Tunes roots, as evidenced by the design of the shield.

Logo: On a red background, we see the WB Shield with the "Animation" script below it. The shield opens up and Daffy Duck emerges from inside. He proceeds to bounce around the screen and interact with the logo, including taking "Animation" and flipping it like a flipbook, then using it to hit the shield like a gong. Daffy continues bouncing around until he runs smack into the camera and goes into a daze. Finally, the shield is opened again by Porky Pig, who grabs Daffy by the neck and pulls him back in before closing the shield, leaving one of Daffy's feathers to float down onto "Animation".

FX/SFX: 2D animation of Daffy and Porky, as well as Scorpion in Mortal Kombat Legends: Scorpion's Revenge (Ed Boon, the Mortal Kombat series' creator, serves as the creative consultant of that variant), and their interactions with the logo. This was directed and storyboarded by Pete Browngardt, and animated by veteran animator Eric Goldberg.

Availability: Current, and is currently being used in tandem with the previous logo on movies. This was first seen on Teen Titans Go! To the Movies. and later appeared on Justice League vs. the Fatal Five, Scooby-Doo: Return to Zombie Island and Mortal Kombat Legends: Scorpion's Revenge.

Editor's Note: This logo is very funny and should please Looney Tunes fans.

Here is some information about the copyright stamps on the Warner Bros. Animation series:

Retrieved from "https://closinglogosgroup.miraheze.org/w/index.php?title=Warner_Bros._Animation&oldid=72468"
Categories:
Cookies help us deliver our services. By using our services, you agree to our use of cookies.